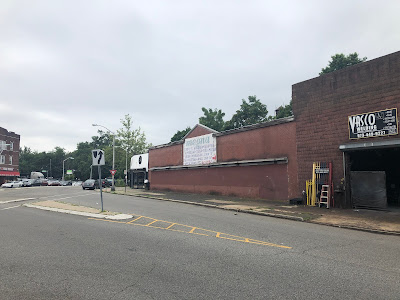 I was thrilled to stumble upon this store while driving from Orange to Belleville (and yes, I do mean stumble; it took me several trips around the block before I could get a parking space and was going the right way down the one way street). A 6,000 square foot A&P, this store even came with a parking lot which has since been walled in and converted to a storage yard by the stone importer. Ampere has always been the most affluent neighborhood in East Orange, meaning that when this store was built it was one of the most desirable places to live in Essex County. Though the neighborhood doesn't today have a supermarket, it's likely served by the large SuperFresh Food World (formerly Pathmark) just to the north in Belleville, which we'll be touring in a few days. First, though, we're going to pass through downtown Bloomfield beginning with one of the city's newest stores tomorrow on The Market Report, along with a current supermarket and a former supermarket in the same mall in the northeastern part of town!