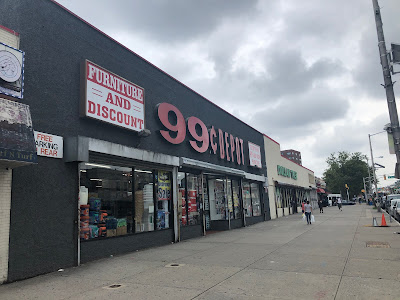 Okay, so I uh... didn't do my homework on this one. I was under the impression the ACME was here where the 99 Cent Depot is now, but it wasn't. (The 99 Cent Depot, by the way, is actually two floors with a basement, so it's more likely an old department store.) JoshAustin610 identifies the building all the way at the corner, or all the way to the right in my picture, as the actual former ACME. However, I was not under the impression that ACME was still building 6600 square foot stores as late as 1951; the Dollar Tree building looks to me more like a former ACME at 13,000 square feet. These buildings are at the far eastern end of the 800-900 block of Springfield Avenue, but the westernmost building of this strip now called Maple Spring Commons is a supermarket which we'll be touring tomorrow on The Market Report!