I think I've mentioned that I spend about half my time in northern New Jersey and the other half in Worcester, Massachusetts. Well, my Bay State companions are known for pronouncing things in a very specific way (as are my Garden State companions, of course). And the DeMoulas chain of supermarkets from northeastern Mass is, in local dialect, pronounced Mahket Bayaskit. Worcester? Wista. Leicester? Lesta. Oxford? Oxfid. Haverhill? Hayvrll. I could go on, but we'll see more of that when we're up in Mass. 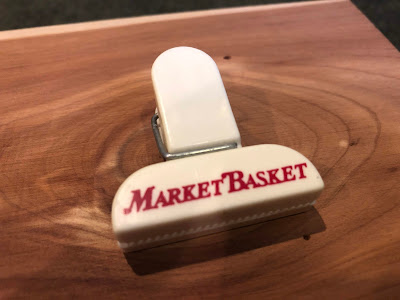 I estimate this clip, which is part of my collection, is from the 90s. And this toy truck most certainly is, pictured outside of the Oxfid Mahket Bayaskit (which is, of course, the Market Basket supermarket in Oxford, Mass, just south of Worcester). 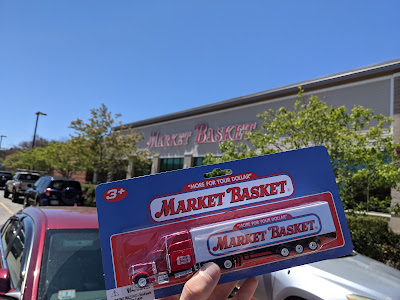 This is not particularly relevant, but I feel obliged to mention that I write these memorabilia posts while watching a livestream of a concert from Indianapolis in a snowstorm in Massachusetts. I said this on the Streetside Sights & Scenes post, but support the arts! (And I assume nobody else was, but were any of the readers here watching Jon McLaughlin's performance of Indiana? That was a good concert.) Well, that's all for now, but come back on May 1 when the store posts return!