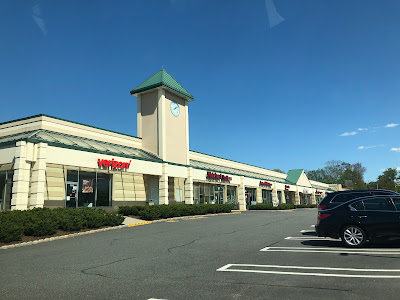 The intersection of CR-613 (Passaic Avenue) and CR-506 (Bloomfield Avenue) has four corners, three of which have supermarkets or former supermarkets. The northwestern corner has a Stop & Shop, which we saw yesterday on The Market Report. The northeastern corner has a former 1950s-era ACME, shown here. The approximately 25,000 square foot building has since been subdivided, with a variety of small storefronts in the front and left sides of the strip mall, which extends farther to the right than the ACME would have. The back part of the ACME is now a Harmon Face Values drugstore. It looks to have been subdivided long ago, as there are virtually no remnants of the ACME around (I doubt the clock tower was ACME's tower; the 1950s-era stores were not typically built with towers). The southeastern corner actually has two stores, a former A&P which we'll take a look at tomorrow, and a ShopRite which we'll tour next over on The Market Report!