Yesterday we took a look at three different bags in which circular ads would be mailed to people's homes. This first bag features an advertisement for Twin City Supermarkets, a local chain in northern NJ. This bag was printed and distributed about 5 years ago. Since then, the Bridgewater and Jersey City locations have been converted to the Aqui Market banner and a new Aqui Market has opened in Califon. See our coverage of Califon, Sip Avenue, Garfield Avenue, and Elizabeth on The Market Report. The rest of the stores listed on this bag will be coming soon to the blog -- yes, I've photographed them all, along with more detailed coverage of Califon! 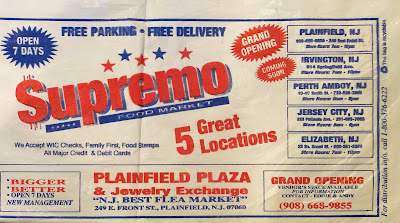 And this bag for Supremo Food Market. This bag has long confused me, mostly because I don't actually know how old it is. But I'd assumed Plainfield and Irvington opened around 2005-2007 (with Elizabeth being the first and Jersey City being the second). I don't think the bag is actually that old so that means they were using an outdated design around 2010-2012 or so. Supremo today has 14 locations, and they've lately become one of my preferred stores to shop at, especially to get the sales which are typically quite aggressive. We've covered the Supremo in Elizabeth, along with their other location in the city called CitiGrocer, along with their new Allentown, PA location. Additional coverage of more Supremos is coming soon! 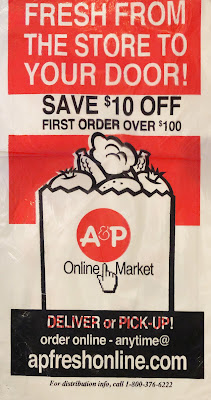 Wrapping up with this one advertising A&P's Online Market! This bag is probably from around 2012 also. Today, all of the A&P locations the circular in this bag would've advertised have become ACMEs, which I could not be happier about.