I don't know how common this is in other areas of the country, but in northern NJ, many houses receive these bags weekly filled with local supermarket, drugstore, and discount store circulars. The bags themselves are typically branded with the logos of the stores whose circulars are included inside. This one dates back to around 2014, with A&P, Food Basics, and Pathmark logos featured. 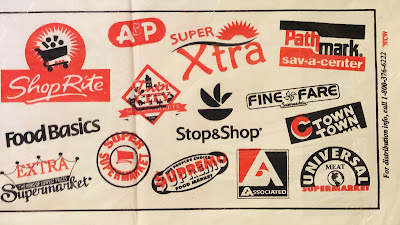 This one is printed with black instead of blue ink and features the Pathmark Sav-A-Center logo along with the logo of Super Xtra, an independent store in Newark which has since closed. (Additional coverage of that store will be coming.) Tomorrow we have three more circular bags with store-specific advertisements!