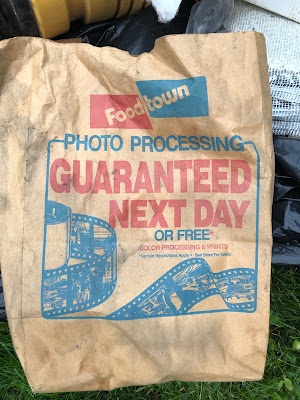 Walking around my neighborhood, I found this bag that someone had put out with the garbage. Unfortunately, it had probably been kept in a basement or something as it was damp and mildewy. My asthma would not have taken kindly to it. It's hard to tell exactly which Foodtown it came from, as my town hasn't had a Foodtown for probably 30 years at least. It's entirely possible it came from that store, as it shows the pre-1996 logo, but it's also possible it came from the still-in-business Foodtown a few towns to the north which is popular among some residents of my town too.