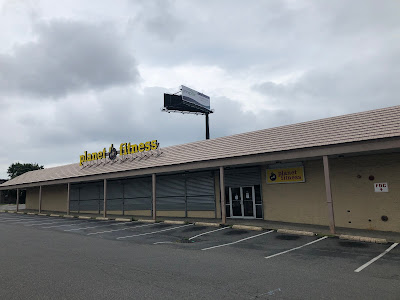 We're heading to the south of interstate 280 (and to the east of the Parkway) to see this former supermarket on the eastern border of East Orange. Now if you can believe it... this former Mayfair Foodtown (which may have been built as a Food Fair, I'm not sure) actually stayed abandoned until around 2010 when 99 Cent & Discount Depot moved in and fixed up the place. Check out these Google Maps street views from 2007 here and here. Foodtow! But seriously... I'm pretty clearly seeing this logo on that pylon. Could that logo have been up all the way to the end? That means it was still sporting that logo while the rest of the Foodtowns moved on to this logo, this logo, and some maybe even to the current one. Today, the store and its accompanying strip mall have been extensively remodeled but the bones of the Foodtown are still there. Up next we're heading just over the border into the Roseville neighborhood of Newark before crossing back over into East Orange's Ampere section. Head over to The Independent Edition for tomorrow's post!