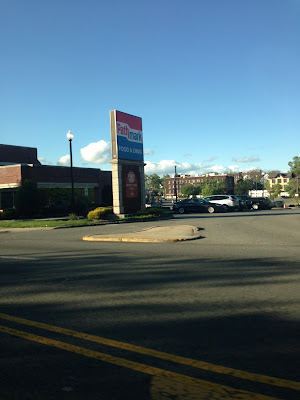 Today's stop is back along Bloomfield Avenue after taking a quick detour a mile and a half to the south yesterday for the West Orange Whole Foods. Unfortunately, this sign is the best we're going to do as far as coverage of the Lackawanna Plaza Pathmark in Montclair, as the rest of the store is invisible from the street. You can see lots more coverage on Styertowne's Flickr. The Pathmark closure was the nail in the coffin for the dying indoor mall partially built from a former train station, and redevelopment plans have lagged due to conflicts with local residents who seek to limit traffic and development in the neighborhood. A past proposal can be viewed here, with LIDL as the supermarket anchor. LIDL seems to since have pulled out and the property recently changed ownership. There are still plans for a supermarket of up to 45,000 square feet, but a tenant has not been found yet. Up next we'll be taking a detailed look at the downtown areas of Orange and East Orange roughly along INT-280 (Main Street and Central Avenue). Most of the stores in this next portion will be over on The Independent Edition, including tomorrow an update to a store we've been to before!