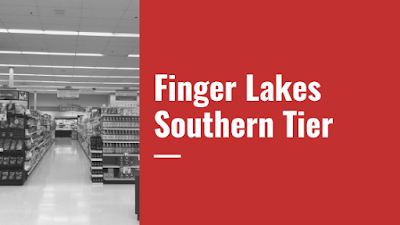 We have two more groups before we finish New York! The first one is in the Finger Lakes and Southern Tier regions of New York, in the central part of the state from near Syracuse down to Hornell and across to Binghamton. And dedicated readers of The Market Report will know that we've actually done this area before with several stores. Well guess what, we're back for even more! 26 stores to be exact, with coverage on all three blogs. The Finger Lakes are a series of eleven long north-south lakes in central New York, with the Southern Tier being the region of NY right south of that on the Pennsylvania border. Here's where we'll be going, from east to west and then to the south:

Many of these towns are so small they have only one grocery store, so come back tomorrow to tour the single grocery store in the upscale resort town of Skaneateles!