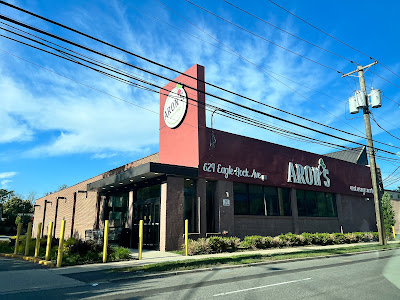 We return to this 8700 square foot building on Eagle Rock Avenue, just east of Pleasant Valley Way in the Pleasantdale section of West Orange. We first saw the store in 2018 (with some photos from 2016) showing Aron's West Orange Market in its soft opening phase, plus some older shots of the CVS that it replaced, then again in early 2019 when I got to visit it myself. I'm not entirely sure why, but Aron's operation was full of problems almost from the beginning. The beautiful displays that the original photoset captured were quickly gone replaced by empty spaces on all the shelves I noticed in my 2019 visit. I went back to pick up a gallon of milk in the summer of 2020 only to find the entire milk case empty, along with most of the bakery department, about half of the deli department, and all of the seafood department. The aisle markers, which I mentioned were blank in 2019, were never labeled in any way. As far as I could tell, it seemed to be a very lazy operation its whole life -- strong start, but absolutely no follow-through. 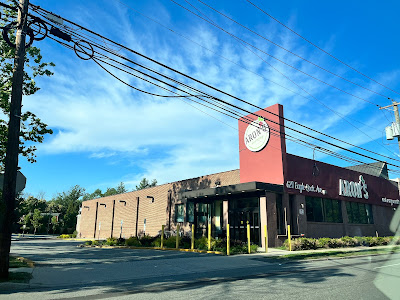 So unsurprisingly, the kosher supermarket closed up shop in late 2021. In fact, I'm surprised they made it that long. It took two years after opening to get real signage up on the outside, and that obviously wasn't enough to save the store. (I live not too far from this store, and it's an area with a large Jewish population -- Livingston is 46% Jewish -- but no kosher supermarkets other than this one. The West Orange ShopRite has a large kosher selection, the Livingston Kings has recently added one, and the Livingston ShopRite has a full kosher department with a deli/butcher, frozen, and dairy, but there are no other dedicated kosher supermarkets. This store should've been an easy success.) Anyway, the store is said to have been taken over by new owners and is being prepared to be reopened as the West Orange Fooderie, another kosher store. That's according to a Facebook discussion, so no idea if there's any truth to that or who will own the store. In these pictures we can see work going on inside the store but no changes outside yet. Very strange, the owners seem to just have up and left one day -- the carts were even still lined up outside the store after it closed. Anyway, tomorrow we have another store closing-related update over on The Independent Edition!