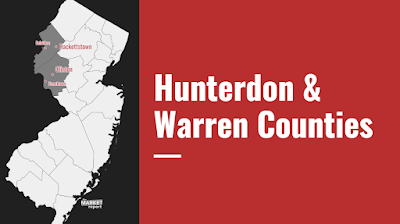 We've finished Sussex County and we are moving on to the next group of northwestern/central western  NJ counties! This area is so sparsely populated that, in fact, the population of the two counties combined is roughly the same as the combined populations of the cities of Paterson and Passaic (in Passaic County) -- with roughly 73 times the land area. That's why we're going to spend a little under three weeks covering most, but not all, of the supermarkets in these counties. Note that Warren County, which is the northern one in the map of the two above, does not contain Warren Township where we saw a Kings and an ACME a while back. We'll be starting in Blairstown which is just about 12 miles due west of Andover as the crow flies, then winding through Hackettstown (the second-largest town in Warren County, population 9700), Mansfield, Independence, Belvidere (the county seat of Warren County), Washington, Hampton (our first stop in Hunterdon), Califon, Clinton, Readington, Flemington, Sargentsville, Lambertville, and Stockton, our southernmost point in Hunterdon County. Then we'll briefly turn north along the Pennsylvania border -- which is the Delaware River -- for Frenchtown, Milford, and Phillipsburg. Most of these towns are small enough that they only have one or two supermarkets, although between former supermarkets and small independent food stores, we'll have some pretty solid coverage of this area. There's a lot of good stuff out in this area, and I'm actually really excited about this group of stores. By the way, can you believe we're only around three months away from finishing all of the New Jersey stores I've photographed? Of course, that's nowhere near every supermarket in New Jersey, but it's still a pretty hefty chunk. Then it's on to lots more, as you probably could've guessed. We begin our Hunterdon and Warren group for now, though, with three posts tomorrow: one each on The Market Report, The Independent Edition, and Grocery Archaeology!

But before we move on, here's some updates for today: